Mummies usually bring up visions of zombies, Hallowe'en costumes, dress-up, and the walking dead. Mummies might be creepy, but they're definitely impressive! Those Ancient Egyptians really knew what they were doing when they set out to preserve a body for eternal life.

Are you a fan of Egyptian mummies? 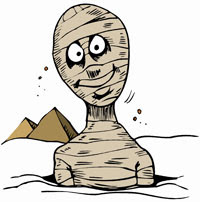 Test your knowledge with the Mummy Quiz!

1. When a body was prepared for mummification, embalmers removed the brain. How did they remove it?
a. By making a cut in the neck and scooping it out
b. By picking it out with a rod via the mouth
c. By pulling it out through the nostrils with a hook
d. Through a hole cut in the top of the head

2. The bodily organs were removed to prevent them from rotting inside the body. One, however was left inside. Which one was it?
a. The heart
b. The lungs
c. The liver
d. The intestines

4. Ancient Egyptians believed that humans thought, felt and reasoned with this body part:
a. The brain
b. The stomach
c. The heart
d. The eyes

6. What sticky substance did embalmers use to secure the linen strips in place?
a. Plaster of Paris
b. Egg whites
c. Water and mud
d. Tree resin/sap

8. After the mummy was all wrapped up in linen, a cloth with a picture of a god painted on it was placed over it. Which god's picture was used?
a. Isis
b. Osiris
c. Horus
d. Thoth