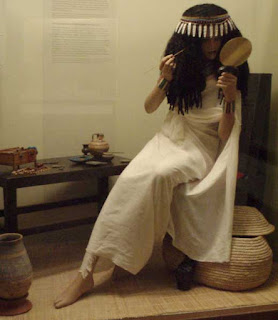 We put together this list of 10 facts to answer your most pressing questions about these amazing historical artifacts.

Whether you're a kid, teacher, homeschooler, a student looking for homework help, a hairdresser, or just a curious fact-lover, we think you'll find this information fascinating!

Let's start off with the basics.

1. What were Egyptian wigs made of?

The nicest wigs were made from human hair. These were also the most expensive. An accounts list from the town of Kahun put hair’s value in the same category as gold.


For the middle class, particularly those who couldn’t afford wigs made completely out of human hair, they would purchase a blended wig, which was constructed of part human hair, part vegetable fibers.

Wigs could also be made of sheep’s wool.

The absolute cheapest wigs were made out of 100% vegetable fibers.

2. Who could wear wigs, and who couldn’t?

Wigs were part of daily life in ancient Egypt. Both men and women could wear wigs. Men’s wigs were often shorter than women’s wigs.

Children did not wear wigs. Instead, girls either braided their hair or wore pigtails, and boys often sported shaved heads. Some kids wore what's called a side-lock, which was a braid on one side.

Priests, also, did not generally wear wigs and preferred to shave their heads instead.

Slaves and servants were prohibited by law from wearing wigs. They weren’t even allowed to shave their heads.

3. Why did Egyptians wear wigs?

Boil up the paw of a female greyhound, the stone of a date, and the hoof of an ass.

4. What color were Egyptian wigs?

Queen Nefertiti, however, bucked both of these trends and had a fondness for dark blue wigs, which she made famous. What a fashion-forward rebel!

5. How were wigs decorated?

There were countless ways to adorn these valuable hairpieces. First, wigs could be curled and braided. Bangs extensions could be added. Men preferred simpler styles, while women loved adding lots of extra ‘bling.’ Here some examples of wig adornments:

6. How were wigs made from human hair?

Hair first had to be collected. It was extremely valuable, and people probably bartered or sold their hair to wig-makers in exchange for goods. Once a wig maker had the required amount, they first cleaned the hair of any lice eggs. Combs have been found with traces of the eggs still in the teeth!

After cleaning the hair, it was separated into various lengths. A wigmaker would coat the hair with a mix of resin and beeswax to make it easier to work with.

Hairdressers would then weave the hair through a cap made of fine netting (which itself was often made of hair) and affix the strands using more wax.

After creating the basic wig, styles would be applied such as braids and curls. The wax and resin would help keep the styles in place through endless wearings, even in the Egyptian heat.

Ready made wigs were made in factories, archaeologists have uncovered the remains of wig factories. Wig boxes have been found in tombs, and may have come from the factories with the wigs inside.

Barbers also made wigs, and so did women. It was considered a very respectable profession.

8. How were wigs cared for?

Because they were so expensive, Egyptians spent effort caring for them.

Since they couldn’t be washed, wigs would be perfumed instead using scented petals, essential oils, and wood chips such as cinnamon bark.

Oils and emollients made from animal or vegetable fats could be applied to keep the wigs shiny and supple.

Beard wigs were false beards made of human hair or wool that were worn using hooks that fastened behind each ear.

Beard wigs were braided and knotted into a tight, solid rectangle or tube shape that hung straight down from the chin. They became so popular that even the gods were depicted wearing beard wigs.

Beard wigs became a symbol of pharaonic power, worn to show that they were living gods on earth. Even some of Egypt’s queens, such as Pharaoh Hatshepsut, wore beard wigs during certain ceremonies for this purpose.

10. How did wig styles change?

Just like modern fashion is always changing, so did wig fashions change and evolve in ancient Egypt.

Old Kingdom wigs: These were short and either straight or with rows of short overlapping curls.


Louvre - Guillaume Blanchard
Middle Kingdom Wigs: Most people wore one of two styles: a short wig with bangs made of small curls that overlapped one another like shingles. The bangs were short enough to show some forehead, while the side and back covered the ears and neck. The alternative during this time was a long, bulky wig with bangs that framed the face, while the longer back section was formed into waves or spirals that were draped over each shoulder.

New Kingdom Wigs: Many people wore wigs with groupings of long, tassel-ended tails. Women’s wigs became even larger and bulkier, and decorations became hugely popular, including beads and ribbons, and fancy caps. Men preferred less bulky wigs, and ones that were longer in the front than in the back.

As a testament to how well these wigs were made, many have survived until this day. That’s how we’ve been able to learn so much about them. Egyptians believed wigs were needed in the afterlife, and archaeologists have found impressive collections of these beautiful wigs buried with their owners inside their tombs.