Beauty and Cosmetics in ancient Egypt

Cosmetics have been around for millennia. Ancient Egypt had impressive makeup materials, tools for application, and various jars for storing it.
In fact, women in ancient Egypt had a similar ritual to modern women—both for getting ready in the morning, and for going out at night. Many women wore eyeliner and eyeshadow. They used small hand mirrors like the one pictured in the box below. 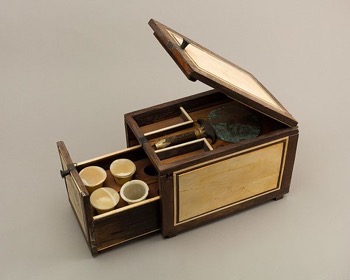 KOHL EYELINER
Perhaps the most famous cosmetic in makeup history is the long, drawn-out eyeliner we always associate with ancient Egyptians. Eyeliner appears to have been primarily black in color. It was made by grinding kohl, also known as stibnite. Stibnite is a soft gray material that’s a sulfide mineral.
Kohl liner may have helped to diminish the bright sunlight outside, which would have been useful given the fact that they had no sunglasses.

MINERAL EYESHADOW
Colored eyeshadow was a second, popular cosmetic they used that's familiar to us today. Ancient Egyptians made eyeshadow by crushing stones and minerals, such as malachite. They were able to create jewel toned colors that would have been quite striking.

LIPSTICK
To color the lips, minerals could also be used. A second way to make color was by crushing carmine beetles, and it's said that Cleopatra used this technique. In fact, carmine beetles are still used today in food colorings and cosmetics. Another lipstick style was a shimmering effect that they created by pulverizing fish scales and combining it with lip color.
Historically, the earliest Egyptian lipstick actually made its wearers quite ill. Women used iodine and bromine mannite, which made them sick. Fortunately, over time they figured this out and developed better materials!

BLUSH
To create a glowing blush effect, red ochre powder was mixed with fat and smeared onto cheeks. It was kept in small decorative pots. In fact, makeup kits have been found like the one above. They contained various cosmetics, brushes and application tools, similar to makeup cases today.

UNISEX
Did you know? Makeup was actually popular with both men and women! When it came to enhancing ones’ features, Ancient Egyptians were gender inclusive.

CLEOPATRA
Here’s a fun fact. When Cleopatra went to Rome with Julius Caesar, she created quite a stir. Women were fascinated by her style: her clothes, jewelry and makeup. They soon started imitating her. Cleopatra’s look became all the rage and soon everyone was trying to look just like her. This is one way that Egyptians played a hand in the history of makeup.

So there you have it! I hope you enjoyed these interesting facts about the history of makeup in Ancient Egypt.

Want to hear more about Egyptian style? Check out this post about wigs. Find out what they were made of, who wore them and much more.