THE LETTER "A" in Hieroglyphics

There are two hieroglyphic symbols for the letter A.


See how they differ, and which symbol is used for which sound.

Pyramids, obelisks, and tombs are covered with symbols, which explorers first believed were simply interesting pictures. Archeologists eventually learned that those pretty pictures were a form of writing called hieroglyphics. They realized that tombs and pyramids were covered with stories and information.

It was an amazing discovery. By learning to read hieroglyphics, the ancient past was opened up. Explorers, archeologists, and historians could hardly believe the treasure trove of knowledge that the ancient Egyptians left behind in writing.

So let's get down to translating hieroglyphs! There are two symbols to represent "A". Each symbol is used for a different sounding "A".

The first hieroglyphic is the vulture. The Vulture is an Egyptian symbol of divine power and is pronounced "AH" 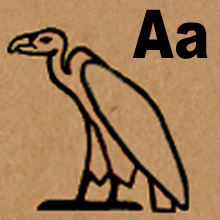 This vulture symbol for the Letter A is pronounced "ah" as in SQUAWK.


REMEMBER KEY:
Vultures are birds that SQUAWK.
Think 'A is for squawk' to remember the vulture symbol.


The vulture hieroglyphic could be used to write the A in names like
Jonathan, Dylan, Landon,
Alden, Emma, and Isabella.

The second hieroglyphic is the arm. 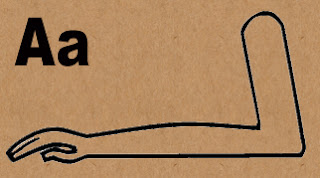 REMEMBER KEY:
Aiding a friend is something you can do with your arms.
Think 'A is for AID' to remember its shape.

WRITE YOUR NAME
The arm hieroglyphic could be used to write the A in names like
Jacob, Jayden, David,
Amy, Grace, and Taylor