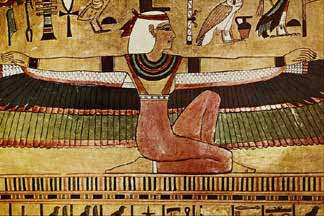 Isis enfolds those who need her in her wings

Who is Isis the Goddess?

Isis is the Egyptian goddess of magic, marriage, healing, and motherhood. She wears a throne on her head and sometimes has wings. Isis is the mother of Horus and wife of Osiris.

The goddess Isis was originally worshiped in ancient Egypt. Later, the Romans also worshiped Isis, and her popularity spread through the Greco-Roman world.

The name Isis actually means throne. That's why when you see images of the goddess Isis, she's usually depicted wearing a small throne on her head as a crown. The reason behind this is that Isis was the religious personification of the power behind the pharaoh's throne. Often, the pharaoh could be shown as a child seated upon the goddess's throne.


Isis was worshiped as the perfect mother and wife figure. She was also the Egyptian goddess of the underdog: a friend to the slaves and the downtrodden. It was believed that she could wrap them in her wings to provide safety and shelter. Isis could also be called upon by the wealthy, however, and a woman might pray to Isis to protect her children.

The myth of Isis begins with her birth. She was the daughter of Geb (the earth god) and Nut (the sky goddess). She married Osiris (god of life, death, and rebirth), and they had a son together by the name of Horus (god of war).

One day Set (god of evil and storms), attacked her husband, Osiris. The two male gods were brothers. Set had always been jealous of Osiris, and their family feud finally came to a head. Set hacked Osiris to pieces and scattered the pieces of his body all over the earth.

Isis was understandably distraught. She searched and searched until she found every single piece (except one, which had unfortunately been swallowed by a fish). Using her magic abilities as a mother, a wife, and a magic protector, Isis made him whole again. Osiris came back to life, and they were once again reunited.
Another interesting myth about the Egyptian goddess Isis is the time she tricked Ra (the sun god, and sometimes the king of gods) into telling her his "secret name". It was believed that by knowing someone's secret name, you could hold great power over them. To discover Ra's secret name, Isis caused a snake to bite him. She possessed the only antidote, and Ra would die without it. So Ra told her his secret name, and she restored his health. After this, secret names became very popular in Egyptian magic spells.

The farthest origins of Egypt's goddess Isis are hard to trace. Most Egyptian deities (click for a list of gods and goddesses) have their roots in a local cult. That then would spread to a larger embracing of the god or goddess. With Isis, however, her roots are unclear. What is certain is that the first concrete mention of her comes from the 5th dynasty. Her name is written on the temple of king Niuserre.

The importance of Isis grew during the Old Kingdom period when she took over certain funerary duties. For example, she was known as the mother of the "four sons of Horus"--those sons are the deities that protect the canopic jars that stored the remains of the deceased.

After a pharaoh's death, Isis also represented his wife or assistant when he moved on to the afterlife. As such, her name was mentioned over 80 times in the Pyramid Texts. These were the pharaoh's funeral texts, which acted as a sort of manual or set of instructions for the pharaoh to use during his travels to the afterlife.

"I have come to be a protector unto thee. I waft unto thee air for thy nostrils, and the north wind which cometh forth from the god Tem unto thy nose. I have made whole for thee thy windpipe. I make thee to live like a god. Thine enemies have fallen under thy feet. I have made thy word to be true before Nut, and thou art mighty before the gods."
~ Egyptian Goddess Isis quote, the Book of the Dead

It was in later years, during the New Kingdom, that Isis became known as the mother of the pharaoh. Some statues and images show her nursing the pharaoh as she sits on the throne.

By the time the Greeks and Romans had begun to worship Isis, she'd taken on the ability to control the weather and interpret dreams.

Her worship began to wane at around 450 CE. At this point, it had been decreed by the rulers of the time that worshipping pagan gods and goddesses was forbidden. The last temple to close was at Philae.

Isis Qualities: SUPPORTS THE DOWNTRODDEN * LISTENS TO THEIR PRAYERS

Isis Famous Magical Act:
Isis put the body of her husband Osiris back together after Set chopped Osiris to pieces and threw the pieces to the far corners of Egypt.

Isis Attributes:
It is said that Isis possesses the strongest magic of any Egyptian deity. She is called upon in most Egyptian magic rituals because her powers of healing and protection are unsurpassed.

Isis Star association:
Isis is associated with a heavenly star called Sirius (Sopdet). The star's appearance in the sky ushered in the New Year. This is fitting, as Isis is a mother and symbolizes births and new beginnings.