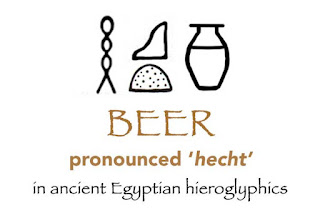 Do you love beer? Have you ever wondered about its history?
Today we bring you 10 facts about ancient Egyptian beer.

[She] sent you to school when you were ready to be taught writing,
and she waited for you daily at home with bread and beer.
- Instructions of Ani, regarding his mother

1. Gift From The Gods

According to legend, Osiris (Egyptian god of the afterlife, renewal, and rebirth) taught the ancient Egyptians how to brew beer.

Ancient Egyptians didn’t have the benefit of hops, so their beer tasted different than today’s version. It was often flavored with fruits.


3. Get Out The Strainer

Ancient Egyptian beer was not clear. It required a lot of straining to remove the chaff and other floating debris.

The Giza pyramid construction site--which was staffed by 10,000 workers--had its very own enormous brewery to supply all those laborers.

Speaking of Giza, each pyramid-builder received three rations of beer per day. This kept them hydrated, and provided extra calories. Given that there were 10,000 laborers, though, that’s a lot of beer! (side note: beer was often quite low-alcohol)


People throughout ancient Egypt were often paid in beer, so the jars were roughly uniform in size.

8. Beer For What Ails You

Beer was so popular in ancient Egypt that rulers didn’t dare put a tax on it.

Yes, famous Cleopatra VII lost a little popularity toward the end of her reign when she implemented a tax on beer. Apparently, she claimed the tax was to prevent public drunkenness but in truth it probably helped pay for Egypt's war with Rome.

The mouth of a perfectly contented man is filled with beer.
- 2200 BC inscription

Ancient Egyptian beer probably didn't taste much like Budweiser. It's likely there were hundreds of home-brew recipes for how to brew beer. If you recreated it today, it probably wouldn't make the pages of Beer Magazine. Yet ancient Egyptian beer is at the roots of some of the oldest traditions in brewing.

Who knew ancient Egyptians had such a fascinating history with the wonderful, humble beer?