The Letter "P" in Hieroglyphics 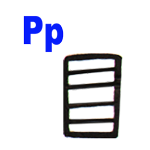 Kat says: "The step stool is the symbol for the Letter P.
It's pronounced "P" as in "perch"

REMEMBER KEY:
Here's an easy way to remember the hieroglyphic symbol for the letter P.
A stool makes a great perch to sit or stand on, and the word perch starts with P.
Just think of "perch" and you'll have it!

WRITE YOUR NAME
The stool symbol can be used to write the P in names like
Patrick, Peter, Paul
Patricia, Penny, Priscilla