THE LETTER "C" in Hieroglyphics 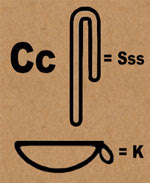 What is the letter C in hieroglyphics?

This basket or cup symbol for the Letter C is for the hard C.
It's pronounced "k" as in CUP.

REMEMBER KEY:
The C symbol looks like a cup. The word cup also starts with C.
Think of C for CUP to remember its shape.

WRITE YOUR NAME
The cup symbol can be used to write the C in words like coffee
and in names like
Connor, Cameron, Carson,
Claudia, Catherine, and Claire.

This folded cloth symbol for the Letter C
is pronounced "ss" as in SOFT.

REMEMBER KEY:
Although there's no C in soft, the "SS" sound is the same and the folded cloth looks soft.
To remember the C symbol, think S for SOFT.

WRITE YOUR NAME
The folded cloth can be used to write the C in words like silk
and in names like
Jace and Bryce
Celia, Cindy, and Cecily