Pyramids vs Tombs: Which did King Tut Choose?


Actually, a lot. In the early years, during Egypt's Old Kingdom, pyramids were popular burial sites for their kings. Many chose to be buried in these grand structures. They were highly visible, and took many, many years to build. To put it bluntly, a pyramid was a pretty impressive place to be buried.

However, pyramids had their problems, and we'll get to that in a minute.

Egyptian tombs were altogether different. They came later and were built in secret. These pharaohs chose to be hidden away, and it was all very low key. There were no outer structures to identify the location of their burial. Not even a tombstone.

That's quite a difference. Why the change? Read on to find out more.

Did you know? Not all pharaohs were buried inside pyramids.

Pyramids were built by pharaohs as their burials sites starting around 2600 BC. They are perhaps the oldest buildings in the world still standing today. The earliest known pyramids are found at Saqqara, northwest of Memphis or modern day Cairo. Pyramids were impressive to look at. They were monumental, and a pharaoh would feel certain that he'd be remembered for all time by building and residing after death in such a huge structure.

Egypt's pyramids had a great deal of spiritual significance. They often lined up with the heavens, and builders and architects designed the tunnels inside to point to certain stars. It's theorized that working with star alignment allowed pharaohs to be resurrected in the afterlife.

Who wouldn't want to be buried in a pyramid? Unfortunately, it turns out there was a downside to being buried in an architectural wonder of the world. In addition to being impressive, sites such as Pharoah Khufu's Great Pyramid of Giza, the Step Pyramid of Djoser, the Red Pyramid of Sneferu and others were easy to spot by tomb raiders. Anyone could see a pyramid from miles away, and everyone knew they were filled with treasure.


Fun fact: Modern explorers have never found a mummy inside a pyramid!


The pyramid mummies disappeared a long time ago, along with the golden treasures, jewels, wigs, toys, and other artifacts that were once hidden inside.

They told tomb raiders exactly where to go. A new idea had to be found. Pharaohs wanted their preserved mummies to rest in peace, and to travel safely on to the afterlife. They believed that the items in the tomb would make sure they enjoyed a happy, eternal life. It must have been frightening to know that all that would probably be taken away by thieves. The answer?

Egypt's rulers decided to build their burial places inside of secret tombs that were hidden in a protected valley, far away from the site of the pyramids.

During the New Kingdom, burials were moved south into this hidden valley. It's now called the Valley of the Kings.

There's an adjoining sacred burial place for women too, and it's called the Valley of the Queens.

The valley is set inland on the dry, desert side of the Nile. On the opposite side of the river lay the city of Thebes.


Who designed these new, secret tombs?

A special craftsmen's village was set up at the foot of the valley by Pharaoh Amenhotep I. The people who lived in the village were responsible for designing the hidden burial sites, and for creating the treasures to put inside.

The craftsmen's town was called the Place of Truth. The people who lived there kept detailed records of their lives, and we are able to learn much about the ancient Egyptians through their writings. Today, its remains are called Dier El Medina.

The two sacred valleys, The Valley of the Kings, and the Valley of the Queens, were guarded well. Patrols were set up along its perimeter to keep any curious onlookers out.

Only the artisans knew where the pharaohs' tombs had been dug into the cliff-sides. They were sworn to secrecy, and once a tomb was completed and the pharaoh had been buried inside, the door was permanently sealed. Rocks and sand were used to cover the doorway. The winds of time eventually made each tomb disappear.


Was King Tut (Pharaoh Tutankhamen) buried in a pyramid?

And now for the answer so many people want to know. Where did Pharaoh Tutankhamen (King Tut) choose to be buried? 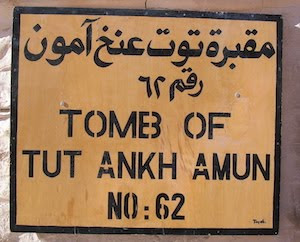 Pharaoh Tutankhamen was NOT buried in a pyramid. He was buried in a tomb in the Valley of the Kings. His mummy and treasures were untouched through the ages, until they were found by archaeologist Howard Carter. His burial site was extremely well hidden. The artifacts and his mummy remained as they'd been left thousands of years before.

Tombs are numbered by archaeologists, and King Tut's tomb is KV62.  For King Tut, and fortunately for us as well, the whole secret location thing worked out.


And there you have it. Pyramids vs. Tombs demystified.