THE LETTER "I" in Hieroglyphics

Today's hieroglyphic is the letter "I"

Kat: "This is a strange letter. It's not like the others."
Zet: "What do you mean?"
Kat: The symbol for the letter "i" can be used for all the different sounds of "i". It doesn't matter if it's the "inh" in ink, or the very different sounding "aye" in lice.
Zet: (Laughs) "Lice! Nice example!"
Kat: (Rolling her eyes) "Yeah. Thought you'd like that one." 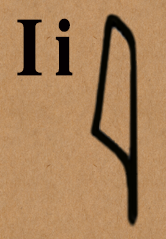 The symbol for the Letter I is a feather.
It's pronounced various ways, including "I" as in ink and ibis (that's a bird)."

REMEMBER KEY:
Today we're offering 2 remember keys.
Ibis starts with an i, and an ibis bird has feathers.
Ink starts with i, and some people write with feather pens.

WRITE YOUR NAME:
The feather symbol can be used for the I in names like
Ian, Isaac and Israel,
Isabel, India, and Iris.

Choose a letter to see its Hieroglyphic symbol:

Are you a fan of Ancient Egypt? Travel into the past in Scott's book, MYSTERY OF THE EGYPTIAN SCROLL