THE LETTER "W" in Hieroglyphics 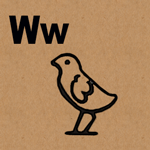 The chick is the Egyptian hieroglyphic symbol for the letter "W".

The chick symbol can also be used for the letters "O" and "U" as they're pronounced in a similar way.

REMEMBER KEY:
Here's an easy way to remember the hieroglyphic symbol for the letter "W"
Chicks have WINGS
and wings start with the letter W

Just look at the chick's WINGS, and you'll have it!

WRITE YOUR NAME
The quail chick symbol can be used to write the W in names like:
William, Wesley, Wyatt
Waverly, Wendy, Winona